A frequent image: that of the ship Argo (luminous and white), each piece of which the Argonauts gradually replaced, so that they ended with an entirely new ship, without having to alter either its name or its form. This ship Argo is highly useful: it affords the allegory of an eminently structural object, created not by genius, inspiration, determination, evolution, but by two modest actions (which cannot be caught up in any mystique of creation): substitution (one part replaces another, as in a paradigm) and nomination (the name is in no way linked to the stability of the parts): by dint of combinations made within one and the same name, nothing is left of the origin: Argo is an object with no other cause than its name, with no other identity than its form.

Another Argo: I have two work spaces, one in Paris, the other in the country. Between them there is no common object, for nothing is ever carried back and forth. Yet these sites are identical. Why ? Because the arrangement of tools (paper, pens, desks, clocks, calendars) is the same: it is the structure of the space which constitutes its identity. This private phenomenon would suffice to shed some light on structuralism: the system prevails over the very being of objects. 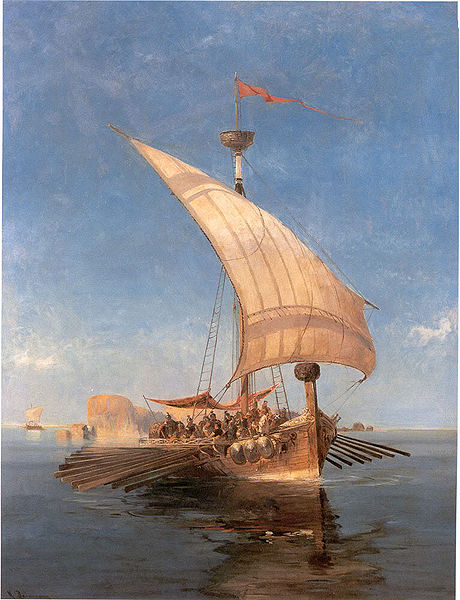 The Argo (luminous and white) is a software system and the Argonauts its human components. They trim its sails and move its oars; its rudder steers by the use of a helmsman.

When each piece comes in turn to be replaced, it is substituted for a better part; newer and hence luminous, but in keeping with the shape of the old. The system is rebuilt anew without an act of raw greenfield creation.

The Argonauts are skilled and far from friendly ports: they repair the ship as they sail it. This too is why one traveller will tell of the grand trireme Argo, and others of a swift catamaran, an Argo with a glorious triangular sail, growing ever swifter, ever smoother as time passes. But most will tell of strange hybrid ships, nautical chimera where names and shapes are stretched before losing now redundant pieces entirely, and reforming around a new coherence.

Some stories tell of another Argo, also sailing and perpetually repaired. When each part eventually decays and breaks, it is replaced with the most perfect imitation, in shape, strength, flex, texture and colour. Some say this Argo has a beautiful unity lacking in the first, where the bastard styles and material of past and future ships are always found together. This Argo is easier to find than the others, for though its Argonauts are strong and brave in battle, they never sail more than a few weeks from Thessaly. It is there, in the forest on the outskirts of Iolcus, that a copse of tall trees grow fast and strong. They are excellent for building triremes, and the Argonauts’ only source of timber. Jason has long ago died, and been replaced with other princes, with their own usurped claims. None of them have held the Golden Fleece.

(I learnt of this Barthesian image from Jenny Turner’s review of Maggie Nelson’s The Argonauts.)

This site uses Akismet to reduce spam. Learn how your comment data is processed.